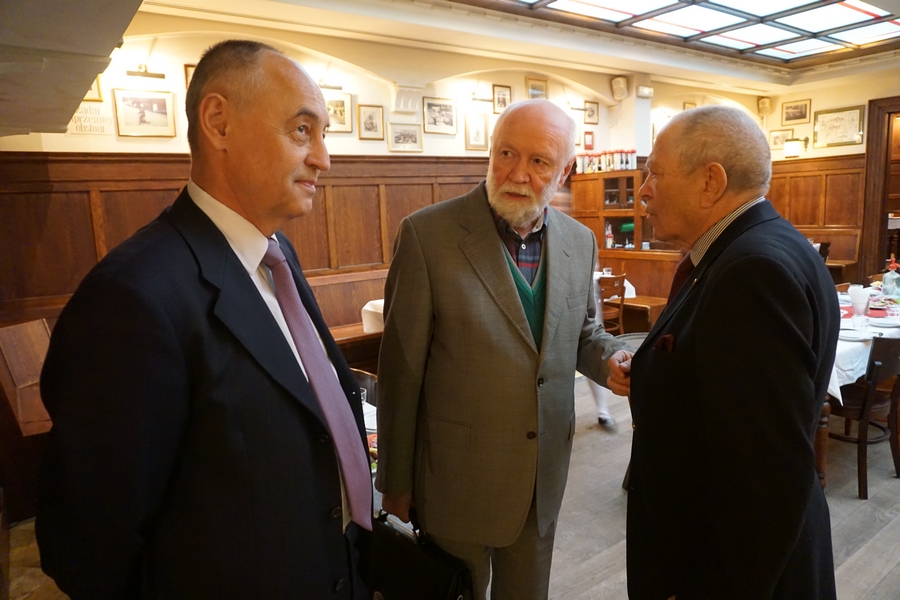 The meeting of the Chamber of Commerce Israel-Poland in Warsaw on 27 October 2014.
In the traditional meeting of the Chamber of Commerce Israel-Poland – branch in Warsaw, like every year, attended by dozens of members of the House. Honors acted the president – Henryk Lewinski and Vice President – Edward Trzosek.
After greeting collected by Henry Lewinski, he spoke Andrzej Malinowski, President of Employers, the oldest because operating since 1989. Employers’ organizations in Poland, representing 10 000 companies, which employ approx. 5 million workers.

He said m. Al., That he enjoys the balance of trade between the two countries, especially recorded in 2013 significant – compared to 2012. – Increase in turnover and Polish surplus of exports over imports. Of course, both can be increased owing to the activities of the Chamber of Commerce Israel-Poland and the Republic of Polish Employers.
He spoke the new ambassador of Israel in Poland, Mrs. Anna Azari, presenting a short speech and announcing the friendly cooperation with the House. Then there was Arthur Tomaszewski President of DNB Bank Poland SA (which partially covered the cost of the meeting) outlining the possibilities of cooperation of the bank with the business.
Among the guests is worth noting the presence of ladies m. Including: Deputy Minister of Sport and Tourism, Catherine Sobierajska, the new Israeli ambassador to Poland, Anna Azari, vice ambassador of Israel in Poland, Ruth Koher, Head of the Department of Promotion and Bilateral Cooperation of the Ministry of Economy Danuta Sojka-Andrzejewska, living in Israel writer, but who writes in Polish, Maria Lewinska and Krystyna Wozniak-Trzosek, editor-in-chief of the English-language magazine “Polish Market”.
The meeting was also attended by many representatives of the government – Deputy Minister of Economy Andrzej Dycha, Director of the Department of Africa and the Middle East, the Foreign Ministry Piotr Puchta, Head of the Department of Supervised and Subordinate to the Ministry of Economy Roman Adamczyk, Director of Marketing Planning Polish Tourist Organisation Robert Kępiński.
Among those present they were also the editor in chief of Warsaw Voice Andrzej Jonas, editor-in-chief of The Prestige Jan Pondel and representatives of many major companies operating in Poland. During the meeting met the old, long-unseen friends, and they had an opportunity to make new friends, the effect of which in the future can be interesting business initiatives.